- the way of the wooden staff -

Jodo was originally called Jojutsu, the name changed to Jodo “the way of the staff” in 1940. This way of using the staff was devised by one master swordsman, Gonnosuke Katsukichi, specifically to defeat another in the early 1600’s. There were wooden staff arts before Gonnosuke’s time, such as the Tenshin Shoden Katori Shinto Ryu Bojutsu techniques using the rokushaku bo (six foot staff), as well as the Sekiguchi Ryu, Bokuden Ryu and the Takeuchi Ryu. Gonnosuke studied the Tenshin Shoden Katori Shinto Ryu school of Iaido under Sakurai Ohsumi No Kami Yoshikatsu, then he studied the Kashima Jikishinkage Ryu, like other Samurai of his time he engaged in various duels throughout Japan to test his skills, until he faced Miyamoto Musashi (the author of the book of five rings). Musashi beat him with a technique using two swords called Jujidome. Unusually for those days, Musashi did not kill his opponent.

From that time, Gonnosuke went on to travel to many places to study martial arts and he became completely absorbed in how to break Musashi’s Juji-dome. After several years he reached Chikuzen no Kuni (modern day Dazaifushi, Fukuoka-ken), and went onto Daizufu Tenmangu Shrine close to a sacred mountain and settled at the Kamado Shrine on Mount Homan where he indulged in a 37-day session of meditation. On the final night in a dream or vision, a child appeared who conferred onto Gonnosuke the teaching of “maruki o motte, suigetsu o shire” (“holding a round stick know the suigetsu”). Keeping this oracle in mind, he reconsidered the design of some original weapons; To lengthen the 3 shaku 2 sun sword by one shaku; to make a staff of 4 shaku 2 sun and 1 bu in length and 8 bu in diameter; and to finally combine the three martial arts of the yari (spear), naginata (halberd) and tachi (sword) to synthesise one martial art, Jodo. With this accomplished, it is said that he went on to break Musashi’s Juji-dome technique. 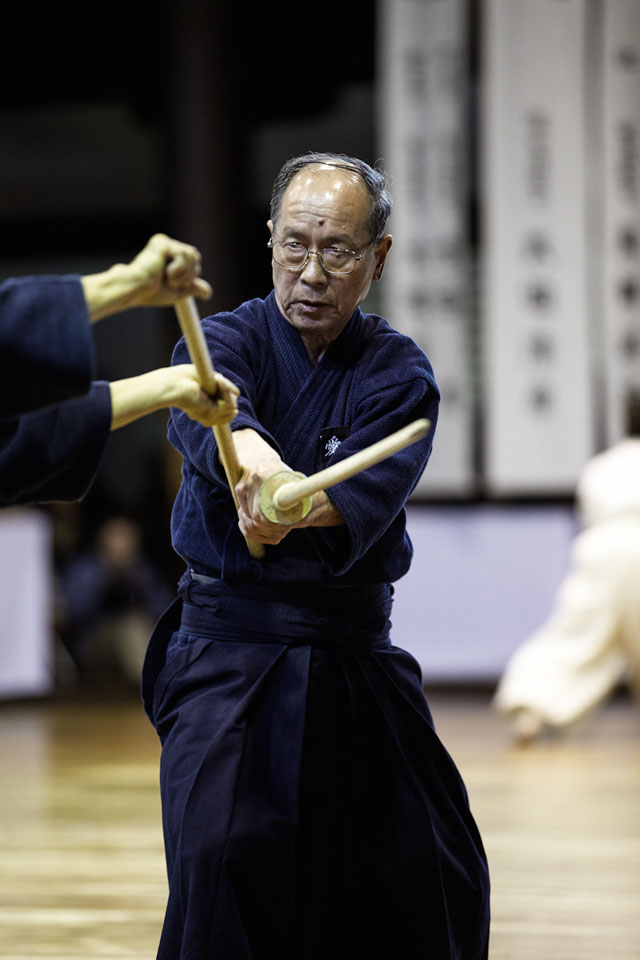 holding a round stick, know the solar plexus 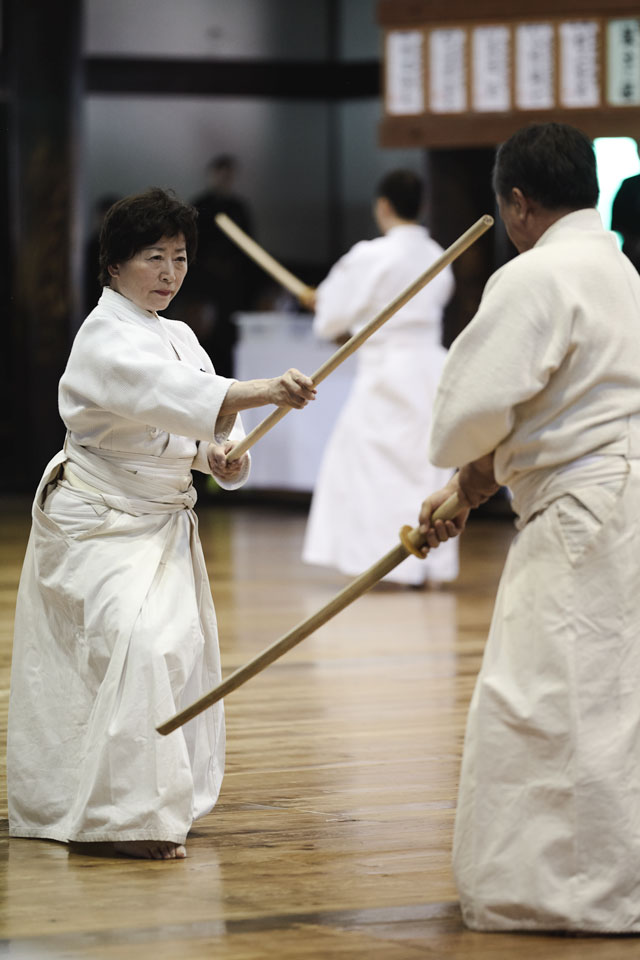 In the 1968 the All Japan Kendo Federation recognized the importance of Jodo and felt that its study would be beneficial to the students of Kendo and Iaido. Accordingly, 12 representative forms were taken from the Shindo Muso Ryu to form The All Japan Kendo Federations standard Jodo forms called Seitei Kata. Today’s Jodo techniques basically comprise three separate types of training These are:

This is done by oneself, repeating one of thirteen basic techniques this teaches good posture and a basic understanding of the movements of the Jo and body

The same techniques are practiced but this time with an opponent wielding a Bokto (wooden sword) this promotes an awareness of Maai (distance) Metsuke (correct vision) and the correct places to hit your opponent.

Twelve Kata. Involving the Jo against a swordsman. The techniques (Kata) At their simplest involve a single attack from the swordsman with an avoidance Manoeuvre and a counter attack, either a thrust or a strike from the Jo. The more complex techniques comprise multiple attacks and defensive moves from the sword and Jo.

Today’s advanced Jodo practice within the British Kendo Association also includes: koryu techniques or older forms from which the 12 Seitei Kata were chosen The koryu schools are Omote, Chudan, Kage, Samidare, Gohon No Midare, and Okuden And also various other weapons which include The use of the short stick (Uchida Ryu Tanjo Jutsu), the metal truncheon (Ikkaku Ryu Jitte Jutsu), the sword (Shinto Ryu Kenjutsu) sickle and chain (Isshin Ryu Kusarigama Jutsu) and rope tying (Ittatsu Ryu Hojo Jutsu), although some of these Ryuha (schools) are rarely seen outside of Japan.

Jodo is normally practised wearing a hakama (baggy pleated trousers) and Keiko gi (training jacket). An obi (sword belt) is worn under the hakama cords. There is no indication of grade by any means in the costume. A zekken is worn on the left chest indicating your name and club, or country when attending international events. The weapons are available through most martial arts suppliers although it is preferable to ask your teacher were to obtain good quality equipment, as the weapons for Jodo are only made of wood (oak) they are obtainable at a cheap price compared to some martial art equipment. 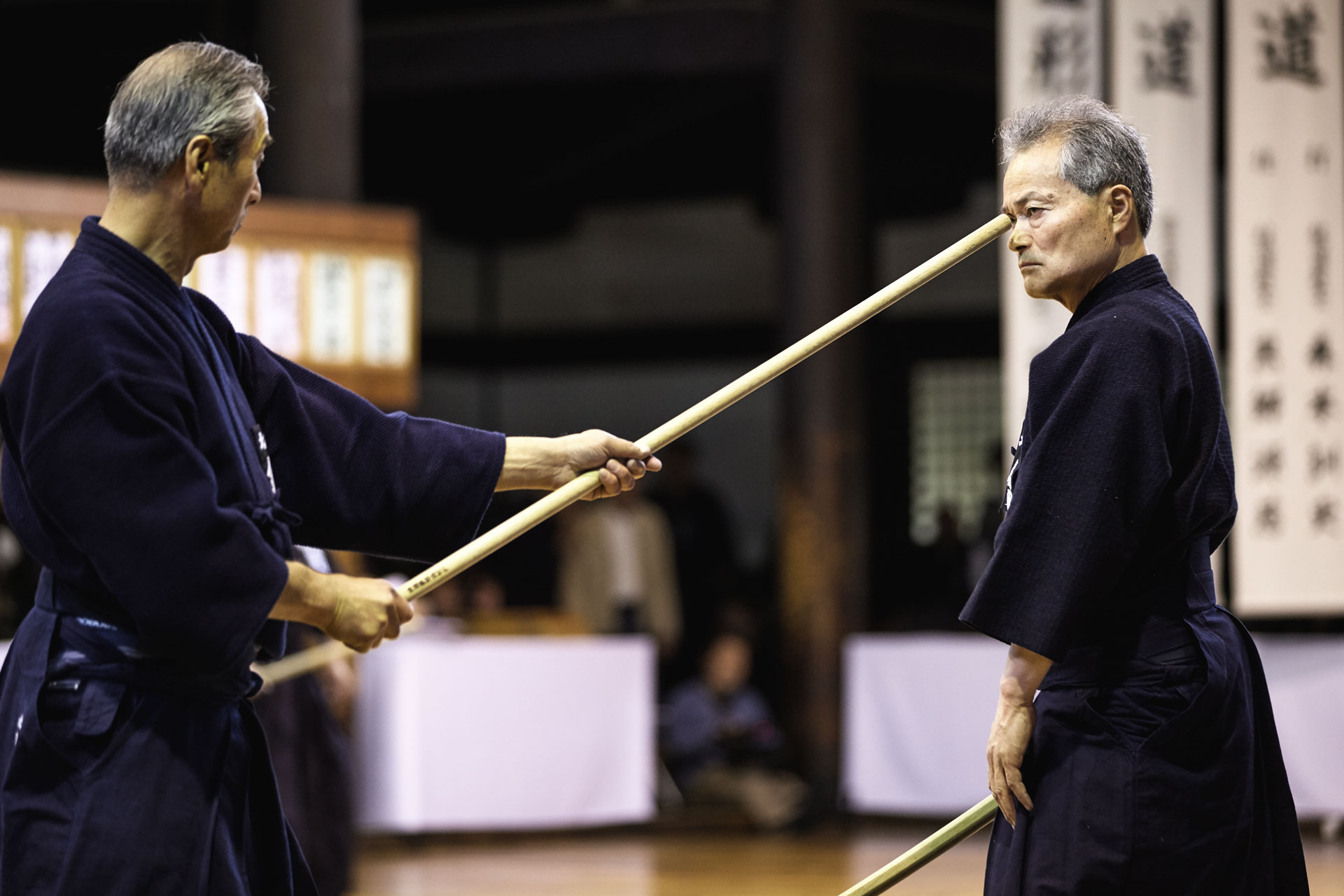